It's almost been a year since the last major update on The Wolf game. Many people in the community are extremely excited as there have been many surveys teasing people of whats possibly coming or in the works. I personally have never ran into a The Wolf Simulator advertisement and I've checked on all of their forums, websites, social media outlets, along with the app store, and there seems to be none. I was tipped by a friend of mine that they had stumbled upon an ad on google which had me quite intrigued. I have done some extensive research and realized maybe the reason they have been hidden is because they may possibly be hinting a new update.

Here is a video of an ad I found:

At first glance it doesnt seem like much, but the first thing I noticed, and it may be hard to tell due to the video quality, is the graphics.  They are amazing! They definetly are better than the current Ultra high available. Also the gems are no longer gems. Instead it looks they replaced the icon to what seems to be a claw. Some of you may think that this may be an old ad before the game was released, but the current map they are in is wild tundra at night. Night cycle was not introduced until early last year. So this has to be pretty recent. A couple other things we found, more of a blooper, is they are using a hacked account. They have over 3m claws, which is more than enough to max all skills, and when the wolf is fighting the doe, they do not have to load. They use fire nova several times within seconds. Another funny thing is, if this is an updated version, they havent fixed the jumping claw's accuracy. The initial claw misses and by the looks of the  second claw, you can tell it will not hit and maybe thats why it may of gotten cut out.
Next ad I am going to show you unfortunately I was only able to get screenshots. But a picture is worth a 1000 words. Although I may only write a few. 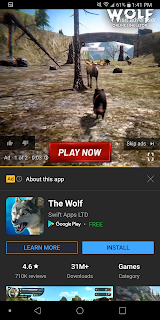 So first thing we see here is the graphics again.  You can tell this is actual game play graphics and not just some cgi created for the ad. Below you can see that this is from the official wolf company and not some third party marketing. We have seen how much potential the graphic quality can improve with their latest game Evil Lands. 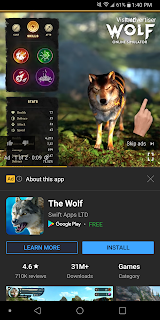 The next picture we see here is a revamped wolf menu, with the same improved graphic quality. The way this menu is set up looks like that there may be more to the customize menu than the current one, which currently only has a skin selection. On this menu the wolf is showcase front facing, which is an odd position unless you can rotate the wolf 360. Maybe in the customizing menu there may be added customization that pans the view differently based on the things you want to customize. And as you can see below, this is an official ad by The Wolf.
What ever the case maybe there is definitely a major update coming soon and we'll just have to wait to find out. The statements that I have made are solely my opinions. They are not facts and I can be totally wrong. But hopefully I am not. Also, I posted the video ad on my story to see the community's reaction and got some interesting feedback, here is what they said: