Showing posts with the label The Wolf Steam
Show all

It has only been 4 days since the launch of The Wolf Game on Steam, and the developers are working hard on getting the game to the same level as the mobile version. Today 10/29, an update was released build ID: 7814680 the file was 1.5 GB. There hasn't been an official log issued out from the company on what exactly the changes were, so I decided to make my own in hope to provide some clarification. Room Chat enabled It was only a matter of time until this feature was going to be added. One of the best parts about The Wolf mobile, is the ability to chat with other players freely, you can create conversations in the server, chat amongst your team in PVP, and call for help with big animals and champions. Before the update, you could only communicate via direct message with players, which would require you to add them to your friends list. New Controls The way the controls were previously set up would interfere when you would direct message a player. The new controls not only do a b
Post a Comment
Read more 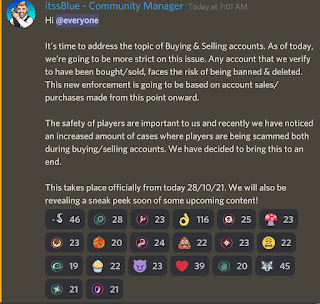 There are many things in The Wolf community that players do which violates the terms of services. One of the major one is selling and buying accounts. Every day, there is always a new story about how a player was scammed after purchasing an account. There are numerous ways a player can get scammed. Some people purchase a hacked account that hasn't been flagged yet, but then later gets banned. Some scammers get the password of the account changed after making the sell, as it can easily be reset with access to the email. And others victims might pay for an account without receiving access and then never hear from the seller again.  Today, ItssBlue announced that it will officially be monitored and enforced on the community discord channel. Here is what he had to say. "It’s time to address the topic of Buying & Selling accounts. As of today, we’re going to be more strict on this issue. Any account that we verify to have been bought/sold, faces the risk of being banned & d
Post a Comment
Read more 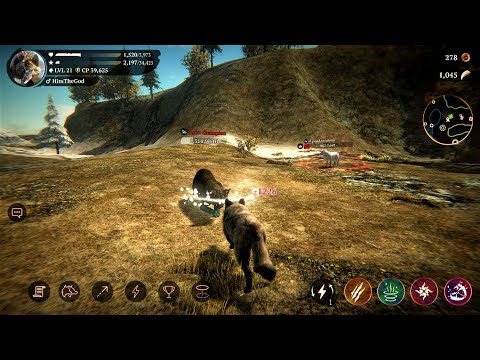 The Wolf on Steam is finally here. Steam is a platform that allows you to emulate PC and console games on your computer. The Wolf,  which originated on mobile platforms, was announced earlier this year to be released by Go Lucky Games with a TBA (To Be Announced) release date. The game was introduced with an amazing CGI trailer describing the life of a wolf which also contained actual gameplay footage. Before the release, there was many questions that The Wolf fans had like, will this game be cross platform? What will the cost of the game be? Are the gameplay footage in the trailer actual quality. In this article, I will answer all of these questions along with giving you the difference between mobile and PC versions.  Purchase The Wolf for Steam here  So, the game was finally released 10/25/2021. The game is currently retailed at $9.99 with a limited time promotional 20% discount which brings it down to 7.99. The game file is currently at 3.03 GB with a default resolution of 1920 x 10
Post a Comment
Read more
More posts