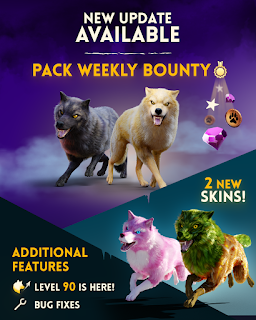 The Wolf Online Simulator 2.2 update has finally arrived! This is the update that everyone has been waiting for! In this update, you can expect to see new skins, a new pack weekly bounty feature, and tons of bugs and fixes along with new balances to the PVP and COOP servers.

On Monday evening, the communtiy on Discord received an exciting alert from itssblue via the announcement channel. The message stated:

"The new update is officially here and there is a lot to check out! Are you ready to jump into the Pack Weekly Bounty and start earning rewards as a pack? Perhaps one of the two newest skins catch your interest? Alongside this, we are releasing multiple bug fixes and we’ve increased the max level to 90. This isn’t all though, later this week we’ll be announcing one more surprise!"

He then also added in a seperate message:

"There is one more big part of todays update, i'm going to do my best to explain it. Basically there are no more CP thresholds on COOP, its done by levels. What levels can join others? I'll leave that for you to explore a bit. However this is an experimental change and we may revert it back. For now we're wanting to see how this works. So let us know in #the-wolf-only once you've had a chance to check it out!"

Not even 24hrs had past, the communtiy manager announced the remaining surprise which was a new bracket to the PVP servers. He stated:

"Hi @everyone, it’s time for one more announcement of the day! We have decided to launch some experimental changes to PvP. Now before I explain further, please understand these are experimental, these could change back to how they were prior to this update.

We want to improve the experience in PvP which is why we are launching these experimental changes. We will closely monitor the situation and see how things go. If you have any feedback, do not hesitate to let us know in the update-feedback channel!

With all these new exciting changes to the game, I decided to go into a little more details and explain my thoughts on the new features. 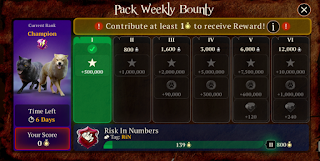 Pack Weekly Bounty is probably the biggest enhancement to the update. Even though the concept is simple, this new feature brings tons of fun to the game, allowing everyone who is in a pack to work together and participate in the challenge. The way this feature is designed, it gives players an amount of points for every quest that they complete. Those points received then gets put in a pool with the rest of the pack members points. There are different tiers of rewards, ranging from EXP, coins, and gems, depending on total amount of points earned at the end of the week and your wolf's current rank.

Second part of the major update are the 2 new skins. I can honestly say that, based on the skin suggestion channel on Discord, no one expected anything like this. In my opinion, these skins are a little over the top. The Forest Wolf is still not attractive to me even in the game play, the communtiy had received a sneak preview of the skin earlier in the week, and to be honest, it looks worst in the game. As far as the pink wolf, the design is pretty cool. The pink wolf is the only skin which has blue eyes and also has a heart on its chest. The only downfall to the skin is, its very biased to a gender. I am positive that more skins will appear later and I will continue to wait for mine.

Everyone seems to have mixed feelings about this one. Some players feel like they will never be able to reach the level as they have already struggled to reach 70 plus their lack of COOP, which now cause them to lose motivation. I on the other hand, am excited! This new level to attain gives me something to work for. This will not only improve my wolf's overall stats, including speed and defense, but also give me gems along the way. For those who remain in coop even after reaching lvl 70, will attain the new max in no time and will have the bragging rights.

- Optimized clan chat message loading to not freeze as much on lower end devices.

I have noticed a significant improvement in the pack chat. Before the update, I had requested for the developers to switch the pack chat from the friends list. One major reason for that suggestion was because of the loading time. Now the pack chat is alot quicker and has the bounty feature embedded.

Some improvements that were not listed but has an impact on the game are:

The infamous glitch that everyone would never mention is finally gone. This glitch has made it through several updates unresolved. Many players were sad to see it gone as everyone loved the fact that they would still have the effect even after repawning, including myself. Maybe if we cry enough they can may consider bringing it back to the game.

Because of the new Pack Weekly bounty feature, the developers have decided to change the quest refresh time from 12 hours down to 8 hours to allow more cycles to be completed. However, they have removed the 6 hour video ad skip option in the process.

In the past, all notification were the same colors. The notification would drop down at the top of the game, stating if your friends came online or joined a game. Now if your friend joins your room the notification is green. This is a great feature as I used to forget to greet my friends who joined as I never realized they had joined in the group chat.

Below are the rest of bug fixes that were listed which I do not have much to say about as they are self explanatory.

- Fixed an immortal glitch (Players who were found to be abusing this glitch faced temporary/permanent bans depending on the level of abuse.)

- Fixed an issue where players would not respawn after death

- Fixed an issue with a visual display that would randomly show a player taking +/-1 damage.

Here is a visual video of 1Timetrvlrs going over the update.